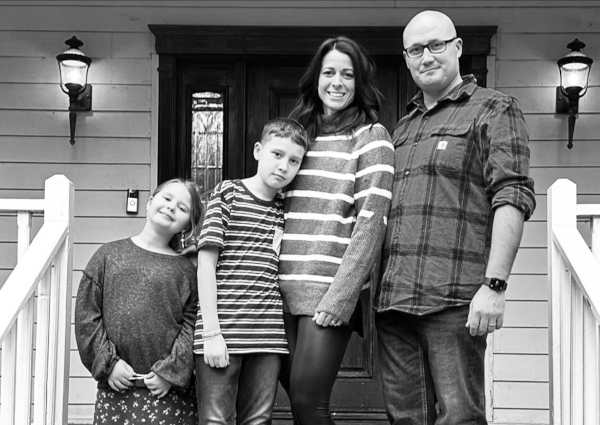 I want to provide my story to help other cancer warriors in their fight as well as to say you must be an advocate for yourself as well as having a great support system in place. In April 2017, I felt sick with flu-like symptoms and had some odd bruising show up on my shins, upper chest, and back. I had done nothing to myself to cause this bruising, so I went to my primary care physician, much to my chagrin, at my wife’s suggestions. I was told I likely had the flu, was prescribed some flu medication, and was sent home. I continued to feel sick, never fully recovering, with some things like the bruising never healing. I returned to the doctor again with the same result, being told that a prior sickness was likely the cause of a ‘long flu’ and was sent home again. Another couple of weeks went by and I still felt terrible, and the bruising still did not go away. Probably from her hearing my complaining, my wife convinced me I needed to have a blood test completed so I contacted my doctor’s office and asked if I could have a blood test done because I was still not feeling well. I was met with the question of ‘what kind’ of blood test I wanted done…. I told them I didn’t know but that I still did not feel well and what they had done up to this point had not made me feel any better. Eventually it was decided that I could have a simple, very simple, CBC blood draw completed. I made my way to the local hospital lab and had the CBC done and in less than probably 5 minutes was on my way back home.

When I arrived home, I received a phone call from the hospital asking if I felt okay. My obvious answer was “No,” that is why I was having the blood test completed. I was informed that my blood work did not look good, in more medical terminology than I can remember, and they wanted me to see a hematologist on the following Monday (this was a Friday) and, further, if I began to bleed, I needed to go to the emergency room because I may not be able to stop the bleeding and I could potentially bleed out. Through some more pushing from my wife, phone calls being made to family, and looking at the numbers we were able to decipher ourselves that I likely had some form of leukemia or blood cancer. I was eventually called back and told to come to the emergency room to be admitted to the hospital and transferred to IU Simon Cancer Center in Indianapolis. I went to the ER, was eventually admitted, and then transported by ambulance to Simon later that evening. I began chemo the very next day and was hospitalized for the next month. Our son celebrated his 5th birthday in my hospital room and our daughter took some of her very first steps in the hallway outside of my hospital room. It was a difficult and very long month. Upon release, I went through several more rounds of outpatient IV chemo, oral chemo, and several ER trips over the next seven months.

During the last five years, I have experienced two false positive (FP) blood tests that indicated that the leukemia was back. To say that these were devastating times, is probably a huge understatement. The first FP was the immediate test after I finished all of my rounds of chemotherapy. It was pretty devastating, thinking that we were starting back at step one and more than likely going to have to do a more aggressive form of chemo and possibly some stem cell transplants. Not only this, I knew that the first treatments I had were about the only option of treatment for the type of leukemia I have. So, I basically just immediate thought I was going to die. It was emotionally overwhelming and an extremely long week and a half to have been retested and waiting for the results to come back, again. The second FP, I was on vacation with my family, standing in a line at Universal Studios in Orlando with my wife and kids and my phone rang. It is never a number I recognized from IU Simon, and I immediately knew there was bad news, my stomach dropped. I answered and was told I had a positive test, and we were going to wait four weeks, test again, and then have wait an additional week to two weeks for the results to come back. This may have been the longest six weeks of the entire ordeal because I had been out of treatment and chemotherapy for about three and a half years at this point. To say things spiraled from there is true, BUT, we stayed strong and tried to mentally prepare for what may be coming. I went into a depression but tried to keep a smile on my face and be strong for everyone else. I did not want other people to know I was scared it may be starting over. Eventually, the results came back, and it was a FP. An emotional rollercoaster…. The practice of medicine is science, and as we all know science is imperfect but is continuously improving. Cancer research and treatment is no different. Unfortunately, these things do happen and while it is unfortunate, stay strong through all the phases, talk to your loved ones, and let your caregivers and family know what you need.

I learned about many things during my treatment including Tricia’s Hope. I learned about this amazing community of cancer warriors and survivors from all over the country. Most importantly, I learned about how important it is to have a support system, be an advocate for yourself or someone advocating for you, ask questions, and soak in the information. You are going to be inundated with information and it is information that is difficult to process given the emotions you are going through. Keep your chin up, fight like you’ve never fought before, and stand-up tall and be proud. It is okay to be depressed, it is okay to feel overwhelmed, and it is okay to not be okay. Surround yourself with your loved ones and fight, fight your hardest because we all want you to win your fight against cancer. We, SURVIVORS, and everyone else are standing with you. People like Tricia and organizations like Tricia’s Hope are here to help in every possible way that you can imagine.